August 15 -- Canrim Development Pte Ltd. is a resource development company established by a team with a successful Mongolian business track record, operating in the Mongolian resources sector since 1997. Designed as a vehicle to re-enter the Mongolian resource industry in early 2014, Canrim is positioning for resurgence in minerals exploration activity in the country.

In mineral exploration the sharpest growth in the value of a grassroots property occurs when the first evidence of substantial mineralization (preferably metallic) with potential economic value is discovered on or near the property.  This is the focus of Canrim, developing a portfolio of highly prospective grassroots properties on which international third parties can partner with the company.

Since the fall of 2013 Mongolia has realized the need to liberalize its economy in order to re-encourage foreign direct investment (FDI) after protectionist policies in strategic sectors were implemented in 2012. This has seen a re-drafting of the investment  law, which now treats foreign and  domestic investors equally, amendments to the petroleum and minerals law, whereby a more than 5-year moratorium on the issuance of exploration licenses was lifted as the life of licenses was simultaneously extended from nine to twelve years.

On January 26, 2015 the Government of Mongolia officially re-opened the application process  for minerals exploration licenses. And to date Canrim has successfully applied for eleven licenses, receiving certificates for seven. The seven issued licenses, all in western Mongolia, are known as Altai, Burgast, Burkhant, Khonkhor, Khundii, Maanit and Seruun. Additionally, license applications for three additional areas (Khuren morit, Sharga morit and Khar morit) in southern Mongolia are being processed.

Canrim’s strategy for license acquisition from the Government and third parties is predicated on leveraging management’s geological archive from previous exploration activities, as well as geological databases from the Minerals Resource Authority of Mongolia (MRAM). This approach has led Canrim to focus on regions with known mineralization, but which have received little or no attention in the past.

On the company’s 2015 field season, during May and June six Canrim geologists visited sixteen active mineral exploration licenses (seven held by subsidiaries of Canrim and nine by companies with whom Canrim has developed strong relationships) in western and northwestern Mongolia. The purpose of this field trip was to carry out first-pass reconnaissance level prospecting for evidence of potential economic mineralization. The targeted areas included those with types of rock alteration known to be favorable for metallic mineralization as well as those with particular geochemical and geophysical anomalies, while additional areas were prospected if particular rock exposures attracted the team’s attention while on site. 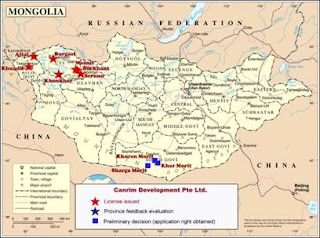