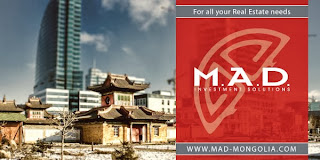 Mogi: this year’s Fiscal Stability Law-mandated debt ceiling of 50% is already tapped out. GoM failed in parliament earlier to raise next year’s ceiling to 60% from 40%. So, this issuance looks like will technically happen in 2014, pinning the hope on raising the debt ceiling next year to facilitate these Samurais and possibly Chinggis II, and also of course, the economy improving significantly.

State-run Development Bank of Mongolia is issuing its first Samurai that will be backed by a guarantee from the Japan Bank for International Cooperation (JBIC).

December 10 (EuroWeek) Nomura and Daiwa have been mandated for the 10 year bond, and one of the bankers on the trade said the size is expected to be smaller than the usual sizes of ¥50bn ($484m) seen in the JBIC guaranteed Samurai markets. The deal is slated for early next week, added the banker. (Mogi: amount not determined yet, I’m sure whatever they can get)

The Development Bank of Mongolia is rated B1/BB-, which is on par with the sovereign and will be one of the lowest standalone credits that have come to the Samurai market, according to the banker.

But Japanese investors are viewing the bonds effectively as a JBIC credit since 90% of the coupon payments will be backed by the Japanese finance agency. The weaker performance of outstanding US dollar bonds issued by DBM and the Mongolia sovereign are also a separate issue to the upcoming Samurais since those two markets are not inter-related, he said.

After this bond prices, either DBM or the Mongolia sovereign may return to the Samurai market, said the banker. Both issuers are also considering another return to the US dollar market, he said.

Mongolia's 10 year credit spreads widened almost 200bp in the past three months before recovering most of the lost ground from a delay in QE tapering, according to a Morgan Stanley report.

Public sector external debt more than doubled to $4.7bn in 2012 (compared from the previous year due two US dollar bonds issued by DBM and the sovereign. The Samurai would add to the government's debt burden, according to a October 7 Moody's credit outlook.

P Please consider the environment before printing this e-mail.